According to archaeological research, life in this region dates back to the VII century BC (Archaeological site Kunara). Administratively viewed, this region of Primosten covers part of the Hilli peninsula which is mentioned by many ancient sources.

According to archaeological research, life in this region dates back to the VII century BC (Archaeological site Kunara). Administratively viewed, this region of Primosten covers part of the Hilli peninsula which is mentioned by many ancient sources. This region was inhabited by Hilli who were members of the Illyrian tribe by which the peninsula received its name.

Known as the “bulwark of Christianity”, this region was always the focal point of trade, administrative and especially military-war happenings.

Even though there are 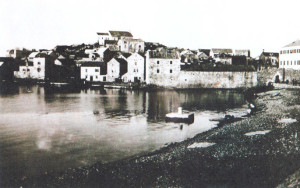 historical gaps, undoubtedly according to Kacic, this region was inhabited in 1386 by the forefathers of the present day inhabitants who were forced to flee Bosnia after the invasion of the Ottoman army. A total of 1
8 families found their new home in this region They formed new settlements by a karst field and so the oldest settlements Prhovo, Krusevo and siroke came into being.

In the last decades of the XV century they were no longer safe even here from the ever increasing Turkish onslaughts. They descended to the sea and retreated to small islands which are mentioned like “Caput Cista” or Gola Glava. It is only in 1564 that it is mentioned under the name Primosten. By then it was already a small island with a settlement enclosed within a defensive wall facing inland. Communication was carried out across a wooden bridge from whence comes the name – pri mostu (at the bridge), Primosten. Reaching fields was difficult due the long distances and this lasted right up to the end of the XVII century after the Cretan and Ottoman-Venetian wars when the Turkish threat was finally ended. The population again began to return to their old homes to devote themselves again to farming and raising of livestock.

This migration had little effect on Primosten which continued to expand and in the XIX century it became the central economic-social point in the western part of Bosoljine (Bosiljine). The once wooden bridge has been replaced by an embankment and the settlement extends out from behind its protective walls.

Suha punta (one of the names given for the long dry time periods) was often harsh to the traditionally diligent blistered farmers’ hands. Long drought periods would often destroy an entire crop which is why to this day Primosten inhabitants, on the saint day of Our Lady of Porta (27 July), pray to Our Lady for rain.

In the second half of the XX century, just like America, Primosten was discovered for a completely new way of thinking and living. Groups of Esperantists under the motto “Sun, sea, friendship, health” deeply embraced European and world integration association before Europe or the world even dreamed of this. Founded on the peninsula of Raduca is a world association that under the aforementioned motto landscapes international gardens bringing land from all continents and countries. At this time Primosten became the centre of intercontinental meeting place of all men of good will regardless of their colour, race, faith, shape, appearance, authority and power. For the duration of their stay in Primosten – all were equal.

The restaurant “Kremik” was opened in 1956 and already then local inhabitants began offering private accommodation.

A camp with a restaurant was erected in 1962 on the peninsula Raduca. In the beginning it was only an oasis for Esperantists. It was also then that four pavilions with the symbolic names “Jupiter”, “Mars”, “Saturn” and “Venus” were constructed and in this way defining interplanetary tourism of which we are witness to today.

In 1965 the first hotel “Raduca” was constructed with a capacity of 250 beds, together with the opening of the well known restaurant “Vila Fenc”. A year later the hotels “Zora” and “Slava” were also constructed.

By 1970 the tourist expansion breaks across the boundaries of the peninsula Raduca and for the needs of guests in private accommodation an annex with restaurant, supermarket and post office.

The luxury hotel “Marina lucica” was opened in 1971 and right up to 1991 was heaven for naturists.

Following this was the construction of the camps “Punta maslin” and Marina Kremik.

Primosten is always a good idea! Follow us for beautiful pictures of Primošten 🤗🇭🇷🌍☉

This error message is only visible to WordPress admins


Error: API requests are being delayed. New posts will not be retrieved.

Error: API requests are being delayed for this account. New posts will not be retrieved.